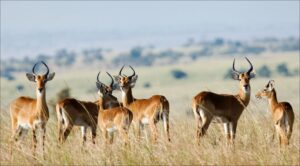 Pronghorns and antelope are often mistaken for one another. And indeed, they are quite similar animals. Both are small and slender and able to run at terrifically fast speeds. It’s not wonder, then, that so many people think they are the same species. However, pronghorns and antelopes are not only different species, but live on two different continents.

Here, we discuss the main differences between pronghorns and antelope so you can tell the difference.

One of the biggest differences between pronghorns and antelope is where they live. Pronghorns live in North America. Antelope, on the other hand, live in Africa, with smaller populations residing in the Middle East and Asia. As such, there is very little chance of the two species interacting with one another. So, if you’re ever wondering if you’re looking at a pronghorn or an antelope, just consider which continent you’re standing on.

Look at their horns

In terms of looks, pronghorns and antelope appear very similar. The one major difference is their horns. Pronghorns have horns that branch in prongs (hence their name). The horns of an Antelope, though, do not branch out. Instead, they curve backwards.

They belong to different families

The more you learn about pronghorns, the more successful your hunt will be. Elk Ridge Outfitters offers pronghorn hunting trips starting in the early fall. Contact us today to book your hunt!